Inpsyder Guido writes about WordPress and Twig. He focuses on how to separate Data from Views to have a cleaner and more testable code.

When having the first approach to WordPress, every developer has started to create templates either for plugins or themes. And every developer knows how difficult it can be to maintain a template that mixes up HTML and PHP code when more features are added to that template. The file gets more complex. And the more things you add and the more code you touch the more difficult does it get fix issues.

Yes, you can split the templates in several parts. And each one will have its own concerns. But most of the time you expose data from the parent to the child template. And that’s not good.
Another thing developers usually do is to use the PHP extract functions to create variables from data collections (usually array structures). That’s not only an uncontrolled way. Moreover, the function takes a secondary parameter flag by default set to EXTR_OVERWRITE and usually, developers don’t change it. So other variables with the same name get overwritten. And that’s not good.

Besides those problems, we as developers like to have a clean and well-formatted code. Code that is: easy to read, self-explanatory, easy to maintain – and even more important: code that is testable.

How to solve those problems?

If you ever heard of MVC you’ll probably have an idea how the before mentioned problems can be solved.

Model–view–controller is an architectural pattern commonly used for developing user interfaces that divides an application into three interconnected parts. This is done to separate internal representations of information from the ways information is presented to and accepted from the user.

Even though implementing a real MVC pattern sometimes can be considered over-engineering, the logic of that pattern could be the base for our approach. In a very abstracted way, we could consider WordPress as our Controller and divide the View from the Model where the view is the markup and the model is the data we want to inject into the markup. When we split the logic of the model from the view, we can produce a more testable and well maintainable code that is also less error-prone.

But how do we split model from view?

Here is where twig and data structures come into play.

Twig is a template engine. A template engine is a software that combines data and view to produce a document. In our case an HTML document or part of it.

In the simplest way, we could define data structures as a collection of values. Php is shipped with a very basic data structure named array. But PHP 7 expands that by including more specific data structures as an alternative of the array. For more information, you can read the Efficient data structures for php 7. In our implementation, we’ll stay on arrays, because all of the PHP versions support them and they are easy to manage.

Let’s say we want to display the thumbnail image within a single blog post. To do so we hook into the the_content filter and make use of twig we’ll obtain the parsed markup then we prepend the image to the post content. For our implementation we’ll use twig-wordpress, a simple library to add support for WordPress filters and functions to twig. We’ll also use some other libraries to define the WordPress model and the view. Then we’ll put everything together.

Taking a closer look we see that the code creates a new TwigEnvironment instance (TwigEnvironment will render our template) using the FilesystemLoader (the loader of the template). The path passed to the FilesystemLoader constructor is the base path where the templates are located. We assume we are looking for templates under the main root plugin directory and we are executing the code above from a script that is also under the main root.

Twig has different kinds of loaders. You can load the template from files, from arrays or chaining loaders (loaders that will be executed in a chain to find the template to load).

So, now we have the twig environment that is responsible of render our template. What we need next is the model and the view. Moreover, we need a way to pass those into the twig env to obtain our template markup output.

The model here is the most interesting part. As developers, we’d like to encapsulate our code. So we’ll build a class that implements the WordPressModel\Model interface that has only one method data responsible of return the data structure we want to inject in our template.

The exact implementation can be viewed into the PostThumbnail class. This will then be injected into the TwigData, a class that will contain the model and the path where the view is located.

What the class basically does is building the data for the view. And as you can see in the code below there is no black magic or difficult things to understand. We’re simply encapsulating some WordPress logic under private methods to better maintain them. And it returns the data needed for the view.

We also pass the data to a filter in case third party developers want to make changes to it.

Now that we have our model, we need a view. Creating a view is simple. As we defined that our twig loader is a filesystem loader, we simply create a new .twig file under the views directory named for example thumbnail.twig that will contain the markup and the property accessors to our model.

Twig uses the double curly braces to identify which kind of data has to be replaced with values.

At the end our markup will look like this:

Twig also allows you to use control structures. This is useful to check against values so the expression {% if image.attributes.url %} means that the markup will be displayed only if the URL contains a non-empty value.

Now that we have the Model and the View we want to render them by using the twig environment instance. To do so, we can use the classes from the package Twig WordPress View. The package consists of two classes, a Controller and a ViewData. The first one is used to inject the model into the right view by using the twig env instance. And the second one is a data class that contains the instance of the model and the view file path.

Then we want to pass it into our controller to be rendered:

Let show everything together.

A note of the use of ob_start() and ob_get_clean() methods. Since the render method will try to output the markup, we have to get the content of that output from the output buffer so we can concatenate it as a string to the content of the post. And that is, we can reuse the $twigController to print other twig data by simply create a new model class and a view.

I created a TwigData class instead of passing the model and the template path directly into the render method to encapsulate them making more simple to move within the code when for example you want to create the data for twig somewhere else. I created a repo where it is possible to play a bit with the code. In case you get interested, you can clone the repo at https://github.com/widoz/twig-wordpress-light-example.

There are a lot more things to discuss when we get into template engines, but I hope that with this article you get a different point of view on how templates can be done in WordPress. Also, there are many ways how it is possible to split the concerns for models and views. This is only one of them, not necessarily the best one, but it is one. 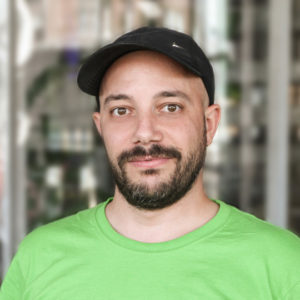 Self-taught developer, I started to use WordPress to pass the exams now I have a job thanks to it.

Love to improve my self in both professional and personal ways.