In this article, we introduce Inpsyde co-founder and CFO Heinz Rohé, who gives an insight into the history of Inpsyde.

Heinz is 65 years old and lives three quarters of the year in Bergisch Gladbach in Germany, and one quarter in the French Pyrenees.

I have been self-employed since 1986. At that time I founded my first retail store. Since 2002, however, a lot has changed in the retail business and I was looking for new opportunities. As a result, I accepted a 2-year lectureship for ethnology at the University of Cologne (in addition to my retail business). And this led over many steps finally to the foundation of the Inpsyde GmbH.

Some time ago, I decided to record the story behind Inpsyde. As I remembered the beginnings, I realized that Inpsyde was actually founded by chance. In the following, I would like to describe my way to Inpsyde, or rather: Inpsyde’s way to me.

It all began at the University of Cologne in the winter semester of 2003/2004. Within my ethnology lectureship, I offered a seminar on Tibet together with Olaf Schmitz, one of my Internet-interested students, with a focus on ethnological field research and the Internet. It was a very special seminar because I used methods of e-learning with the students to work on the topic together. This concept was still very new at that time and we were the first in our field and among the first in Germany to implement such a concept. The seminar was not only very interesting but also extremely productive.

I had the desire to continue working with e-learning and to see which concepts could be implemented. As my lectureship expired and the economic situation in the retail sector had deteriorated further, I was looking for other opportunities. Olaf Schmitz was also enthusiastic about the concept of internet-based working and learning and wanted to start his own business in this area. We had already worked together very well in the seminar and decided to get something going together. Our plan was to continue working with e-learning in teaching, to develop new concepts and possibilities, and to communicate them.

We had many ideas, but most of them were technically complicated for users. During our search for a user-friendly technical basis, we came across the open-source blogging software WordPress in 2004, which was very new at that time and largely unknown in Europe.

WordPress was ideal for us because it was easy to use and free of charge. Olaf also thought that WordPress would become THE thing in the context of emerging social media. He had the right nose.

So, at the end of 2004, we started to look deeper into WordPress and published the first blogs on the web. Olaf founded the Forum WordPress Deutschland with the aim to spread WordPress in the German-speaking countries and to give beginners free help on the way to their own website. Thus, the first larger WordPress community was founded in Germany, besides Japan and the USA.

The community work has inspired us from the beginning and has been a lot of fun. Many people from all over the world worked together here, putting aside all international disagreements, connected by the open-source idea. It was overwhelming – and still is today.

At no time did we know whether our idea of an e-learning platform with online seminars and information on the subject would work economically. And we didn’t have all the resources we needed, such as the money or experienced developers. Nevertheless, in 2006 we founded Inpsyde GbR together with two friends as one of the first pure WordPress agencies in Germany. The community work and thus spreading the word about WordPress was the main focus. We financed this through contract work, training, and seminars on WordPress. The idea to work only in the e-learning sector faded more and more into the background.

In December 2008, the Inpsyde GmbH was founded. The founders were Olaf and me and, amongst others, Frank Bültge (today: CTO at Inpsyde) and Robert Windisch (today: CIO at Inpsyde). As a limited company, we wanted to concentrate more on agency work to support and advance the community with our income and further developments, to create jobs for programmers in the WordPress field, and to organize WordCamps. (E. g. in: Jena 2009, Berlin 2010, Brugg in Switzerland and Cologne 2011).

There were so many things to do as Inpsyde, so many opportunities to take and experiences to make. This motivated us incredibly to push Inpsyde further and it still inspires us today.

Since we lived far away from each other, it was only possible to work remotely ‒ as we still do today. In addition, all of us except Robert worked only part-time and had to find ways to coordinate our work. The biggest challenge was to find suitable tools for our collaboration. And so the circle is complete, so to speak: once again, a part of my work revolved around possibilities for digital collaboration ‒ like in the e-learning seminar at the University of Cologne.

In the meantime, our team has grown to almost 50 employees around the world and we have realized a large number of sophisticated WordPress projects. I am very happy about this success, to which so many people have contributed their valuable part for so many years. From the very beginning, our cooperation and commitment have been driven by our values, which we also find as fundamental in Open Source and especially in the WordPress community ‒ and which still determine who we are today.

We have asked Heinz a few personal questions to give you the chance to get to know him better:

I often read in my free time, usually several books from many different fields. In addition to economics and finance, permanent topics are ethnology, history, communication, and sociology.

So, I recently finished reading three books: 1) Why Nations Fail, the Origins of Power, Prosperity and Poverty by Daron Acemoglu and James A. Robinson. 2) A monograph by Christoph von Fürer-Haimendorf on the Naga, a population group in Northeast India and 3) Romans and Barbarians, a reading book on German history from Late Antiquity to 800.

In Germany, I live on the green edge of my city and it borders near my apartment on a hilly, rural and wooded area, which offers me and my wife the opportunity for beautiful walks.

My city is medium-sized and it still offers a good infrastructure. It borders on a large city so that we can also take advantage of the offers there, especially since it is well connected to public transport.

In France, we live in the countryside in an area that is surrounded by high mountains, low mountains, garrigue-like and Mediterranean landscapes within a radius of 40 kilometers, as well as small medieval villages, towns, and castles. And the sea, although not so close, is within a good hour’s reach.

And the best thing is: because of my remote work at Inpsyde I can connect all this!

What would your friends say about: “That’s typical you!”?

I think that my quality of being constant and reliable is in the foreground. What I like to do, I pursue over decades. And for what it’s worth to me to live, I am persistent. I do it with love and endurance. And Inpsyde with its great employees is definitely one of these things! 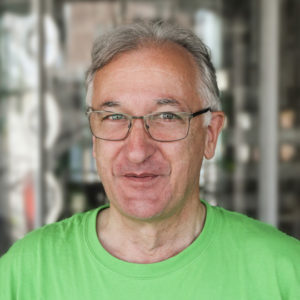